What are Frenchwomen like in your mind? You may think of such epithets as elegant, confident, or chic. Behind their casual attire are their exquisite tastes. They always maintain a ‘sense of ritual’  and never take their life too lightly. And their sweet and easy demeanor appeals to their peers in the rest of the world. Our guest this time is Anais, a typical young Frenchwoman. 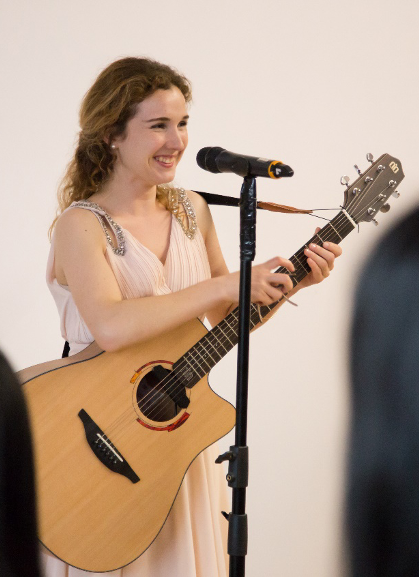 From hotel manager to MBA student

This year marks Anais’s fifth year in China. After graduating from the University of Lausanne in 2014 with a bachelor’s degree in hotel management , Anais got an offer as a manager for customer affairs at the Guiyang Pullman Hotel in southwest China’s Guizhou. She admitted that she at that time did not know much of of China and had no keen interest in its culture. “But I believed China would be ever stronger with more visitors from all over the world. So I decided that the work in Guiyang would be a running start for my career and that I should take this as an opportunity to learn the Chinese language and know more about China’s culture.”

As she began her job in Guiyang, Anais bought Chinese language textbooks and started to teach herself while missing no opportunities to communicate with her Chinese colleagues, some of whom only spoke the Guiyang dialect though. Despite the language barrier, Anais still made quite a few congenial Chinese friends. With their company, Anais went around the city of Guiyang, the capital of Guizhou Province, and visit those friends’ hometown in the countryside. Whenever she recalls her more-than-a-year life in Guiyang, she feels grateful for what her Chinese friends and colleagues there did for her, which helped her out of loneliness.

Afterwards, she left Guiyang for Beijing to join a tourism startup. She went on business trips to Xi’an, Inner Mongolia, Heilongjiang, Xiamen, and many other places, allowing her to have access to genuine Chinese culture and history. During the trips, she was amazed by prosperity across China. Through the tours around China and communication with Chinese people, she not only improved her Chinese language skills but also became more attached to the country. “I have ever since been determined to stay in China,” she said. Considering her imperfect Chinese language skills and her bachelor degree, which seems not impressive enough to win herself a decent job, she decided to study an MBA program after being inspired by her friends. Attracted by SJTU Antai College of Economics & Management, a leader in many authoritative rankings, and motivated by her yearning for Shanghai, she resolutely headed for the city where SJTU is located.

Volunteering to be the class monitor

After passing the IELTS and GMAT exams and getting through the tedious application procedures, Anais was admitted to Antai College with the best performance among all the candidates.

“The first challenge confronting me at Antai was speaking as a representative of the new students at the opening ceremony. I felt nervously excited,” said Anais. Thanks to her excellent speech, she made herself known to her batchmates, and soon became increasingly identified with them. At the beginning of that semester, her class needs  a monitor and a deputy monitor, Anais volunteered in the election and finally became the deputy monitor, working with her Chinese monitor. The duo was perfect to the whole class: Anais appreciated the Chinese monitor was responsible and good at organizational, while Anais was resourceful with strong presentational skills. In response to the duo's call, over a dozen students in other majors joined the class committee to offer their input in its monthly meetings to arrange class activities and other works. 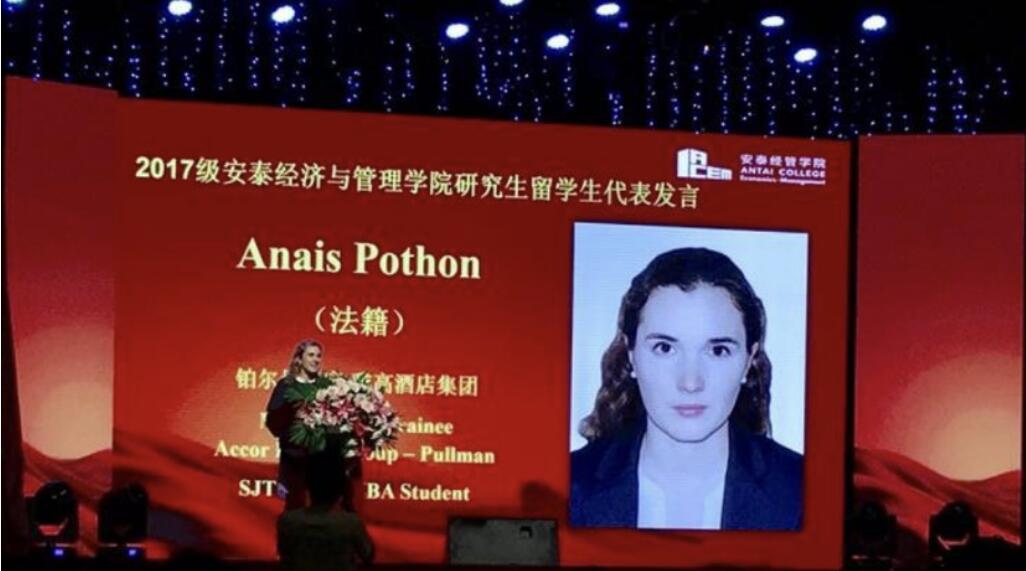 After a period of studies, she found it a really wise choice to enter the MBA program in SJTU. “SJTU is a university with a long history. It embraces plenty of students from across the world, and produces up-and-coming talents. Teachers appreciate our thoughts, and every student is allowed to present their skills and realize their dream,” she said. She coasted through nearly all the courses in her discipline with A's and gained A Plus in the courses of Macroeconomics and Public Policy, Operations Management, and Overview of Chinese Culture. She shared with us what she did in entrepreneurial management courses.  Students were asked to complete a business model structure in a week and present it before investors. “My team was very ‘international’. We had a team member from Thailand, four from South Korea, two from China, and another one—me, from France. Everybody had different views, but we reached a consensus in the end through constructive communication. And the business model we established was also very satisfying,” she said. She believed the law courses helped her a lot in understanding Chinese policies and development plans. 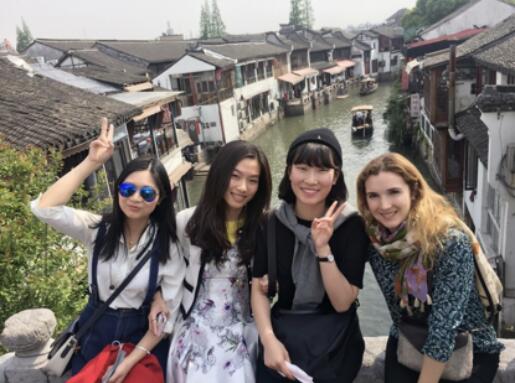 Anais and her classmates visiting a water town in China

She also engaged in school- enterprise cooperation programs, among which Global Lab program was the most impressive one. In the program, she worked for Saint Gobain, a large automobile company. Her team was comprised of both Chinese and French students, and she was the only girl in the team. As a result of in-depth and detailed survey on a real-world problem in the market for the company, they presented a practical solution to the company directorand won much acclaim from the company. They felt very proud of that.

In the eyes of Anais's supervisor Zhou Zucheng, it was natural that Anais had made such achievements, since she was “diligent, proactive, and organized”. As an influential deputy monitor, she always went out to inspiring others to work hard in their studies and in their pursuit of career goals, Zhou said. Under her supervisor's guidance, she was working on a paper on corporate social responsibility (CSR) where she focused on the way foreign companies in China delivered their CSRs based on her personal work experience in both China and other countries. 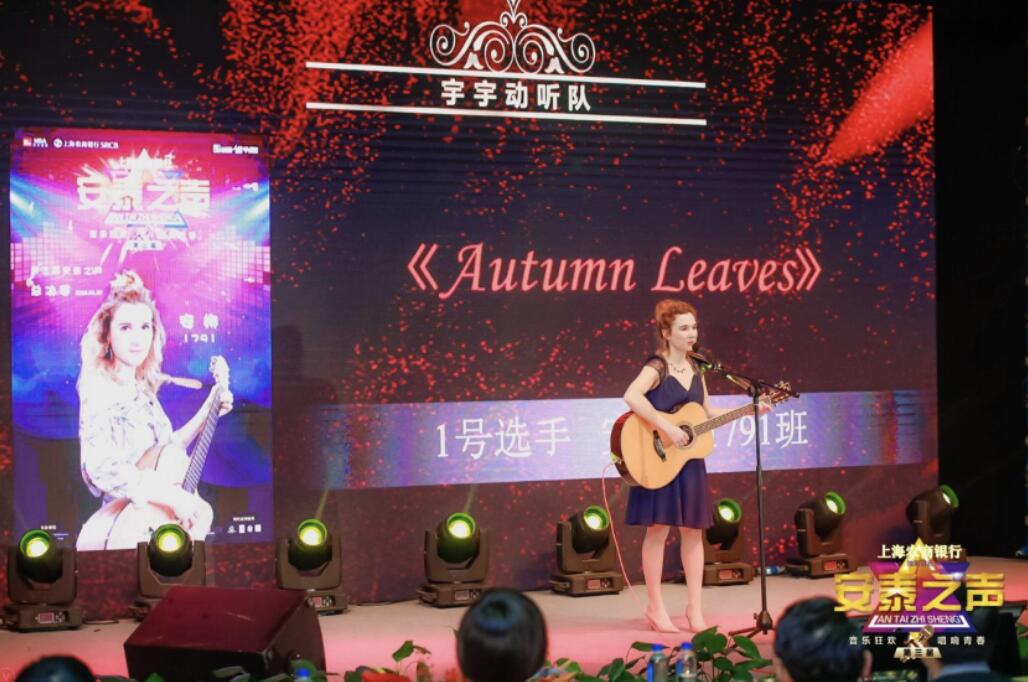 Anais lives and breathes singing. She would often Karaoke with a couple of friends and enjoy songs with them. “There’re a lot of opportunities to join the Open Music Festival in Shanghai, and so many types of music and music elements are available here!”, she said excitedly. In 2017, she took part in the singing competition entitled “Antai Voice”, where she acquainted with a group of people who could share passions for music. Music had also brought her a Chinese boyfriend, from whom she admiringly knew a lot about the significance the Chinese attach to their family and loved ones. 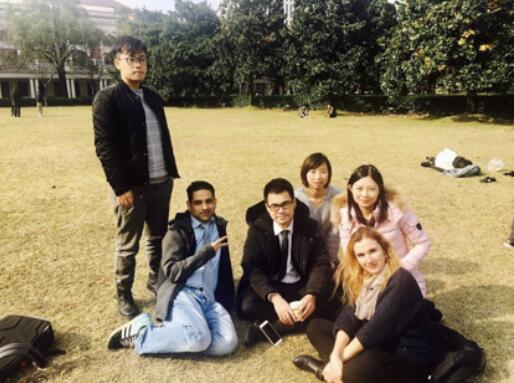 With graduation around the corner, Anais is now really wired working as intern at an European Chamber of Commerce. She worked as an intern coordinator some time ago at the CCI France Chine to help China-based French firms better understand the ways of the world in Chinese culture and business. “I couldn’t have been equal to those jobs if I hadn’t studied an MBA program at SJTU.” She said the courses and projects at SJTU had not only provided her with specialized knowledge but improved her organizational and coordination skills, teamwork spirit, and resilience. She still keeps arriving at the workplace an hour earlier, a habit developed at SJTU, so that she can learn more Chinese with her brain at its most active for the HSK (level 5) test.

“I still remember the first time I came to Shanghai. That time I was strolling along the Bund and overwhelmingly impressed by the seamless blend of modern and traditional styles. It is a truly pioneering city! ” She told us she felt at ease while meeting something fresh now and then in Shanghai. She expressed her confidence that she will write one after another new chapter for a better life in China.