On July 4th, 2022, CERN held a profound symposium to celebrate the 10th anniversary of the Higgs boson discovery. On the same day, Nature published the latest results of combined measurements on the Higgs boson properties from the ATLAS and CMS experiments at the Large Hadron Collider (LHC), as shown in Figure 1.  In the ATLAS paper, titled as “A detailed map of Higgs boson interactions by the ATLAS experiment ten years after the discovery”, the Higgs boson properties are measured with full Run 2 (2015-2018) dataset and the results are in good agreement with predictions by the Standard Model (SM) of particle physics [1]. This is a major milestone ten years after the Higgs discovery in 2012. The discovery of the Higgs boson confirms the Higgs mechanism which explains the mass origin of elementary particles. The discovery was selected as the most important breakthrough of the year 2012 by the Science journal, and it provides the straightforward experimental evidence which led to the Nobel Prize in Physics in 2013 [2,3]. 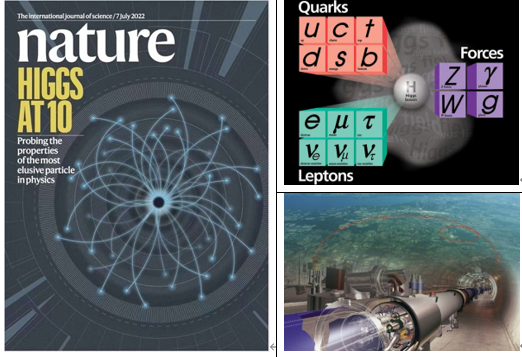 Figure 1: Nature journal cover page – 10th anniversary of the Higgs boson discovery (left); the Standard Model of particle physics (upper right); the Large Hadron Collider at CERN, which lies in a tunnel with 27km circumference beneath the France-Switzerland border near Geneva (bottom right). It is the world’s largest hadron collider with unprecedented center-of-mass energy of 13~14 TeV.

In the SM, matter is composed of elementary fermions of spin , which interact with each other through fields propagated by elementary bosons with integral spin. There are four types of interactions (mediator): the electromagnetic force (photon, spin-1), weak force (W, Z bosons, spin-1)，strong force (gluons, spin-1) and gravitational force (graviton, spin-2 as predicted by quantum gravity theory). The elementary particles obtain masses from their interactions with the Higgs field. The coupling strength is proportional to masses of fermions (i.e. leptons and quarks) and to their mass square of weak bosons (i.e. W, Z bosons). The Higgs boson obtains mass from its self-interaction. The Higgs boson, as the only elementary boson with spin-0 ever discovered, is considered as the mediator of a new type of interaction which is hardly comprehended by human beings.

Precision measurement of the Higgs boson properties plays a leading role in revealing the essence of the new interaction, as well as understanding the electroweak spontaneous symmetry breaking and the evolution of the early universe. The Higgs potential, which generates the Higgs self-coupling after electroweak symmetry breaking, can help to explore the mystery why the vacuum in our universe exists as a metastable (“false vacuum”) state, and therefore have other important cosmological implications, such as electroweak phase transition in the early universe and explain matter and anti-matter asymmetry puzzle. As a portal to hidden sector, the Higgs boson also provides an opportunity to understand the mass origin of dark matter. Thus, precision measurement of the Higgs boson properties is one of the most important goals at the LHC and high luminosity LHC, as well as at the future high energy electron-positron colliders, so called “Higgs factory” (eg. CEPC, FCC and ILC).

The discovery of Higgs particle in 2012 was driven by Higgs to ZZ，gg and WW decay channels [2,3], which confirms Higgs coupling to gauge bosons. The observation of Higgs decaying to t-lepton pair in 2015 proved Higgs Yukawa coupling to third generation of fermion. In 2018, direct observation of Higgs Yukawa coupling to the third generation of quarks (eg. top-quark and bottom-quark) were achieved from ttH production mode and Higgs to bottom-quark pair decay channel [4]. Now, we are hunting for the Higgs coupling to the second generation of fermions (eg. charm-quark and m-lepton) and the Higgs self-coupling via di-Higgs production. Recently, the Higgs decay to m-lepton pair has been observed with 3-sigma standard deviations that claims evidence for the Higgs coupling with m-lepton. Ten years after the Higgs boson discovery, the ATLAS experiment has collected 30 times more statistics of Higgs samples (2015-2018, 139 fb-1) for precision measurement. The ATLAS collaboration combines analyses from all of the Higgs production modes (ggF, VBF, VH, ttH, tH) and decay channels (H→𝛾𝛾, ZZ, WW, 𝜏𝜏, bb, μμ, Z𝛾), and measures the Higgs production cross section and decay branching ratio as well as coupling parameters, as shown in Figure 2. The results are in good agreement with the SM predictions, which provide strict constraints on new physics beyond the SM.

Figure 2: The Higgs production cross sections (left) and the coupling parameters as a function of the particle mass (right). The measurements are in agreement with the SM predictions [1].

The SJTU/TDLI ATLAS team have made important contributions to this combined Higgs boson property measurements published in the Nature paper [1]. The analysis in which team members directly participated are listed in the following (as shown in the ATLAS internal supporting note):

The Nature paper combines analyses involving all of the Higgs boson production modes and decay channels. Thus the following SJTU/TDLI members also have contributions to the paper:

The SJTU team became an official member of the ATLAS collaboration since 2012. Now the SJTU/TDLI team includes 7 faculty members, 7 postdoctoral fellows and more than 20 graduate students. The SJTU/TDLI ATLAS group have made significant contributions to many highlighted results such as the discovery of the Higgs boson and its property measurements, the discovery of vector boson scattering, searching for dark matter and BSM particles, as well as the Muon spectrometer Phase-II upgrade etc. In 2017, SJTU hosted the 5th Large Hadron Collider Physics (LHCP) conference. Prof. Haijun Yang was one of the conference chairs. Now, the team focuses on the Higgs boson property measurements and determining the Higgs self-coupling. With ~3000 fb-1 integrated luminosity at the HL-LHC during the next ~20 years, there is great opportunity to observe the Higgs self-coupling and is able to improve significantly the precision of Higgs boson property measurements and maximize the potential to probe the new physics beyond SM, which could make the next major breakthrough in the fundamental physics.