Mixed-grain structure with millimeter-grade coarse grains (MCGs) is an intolerable defect often encountered in heavy forgings, which may significantly deteriorate the mechanical properties of material and make the service life uncertain. Therefore, it is of importance to eliminate this microstructural defect. The studied material 316LN austenitic stainless steel is a single-phase alloy that there is no phase transformation during common thermo-mechanical treatments, so that recrystallization is the only way for grain refinement of this steel in pratical engineering. To refine the mixed-grain structure through deformation and recrystallization requires a comprehensive understanding on the microscopic deformation heterogeneity associated with the uneven grain size.

Researchers from Shanghai Jiao Tong University investigated the deformation mechanism of the mixed-grain structure with MCGs, using the mesoscale in-situ experiments and the crystal plasticity finite element method (CPFEM). The related paper, entitled with “A multiscale investigation on the preferential deformation mechanism of coarse grains in the mixed-grain structure of 316LN steel”, was published on International Journal of Plasticity.

The paper link is as follows: 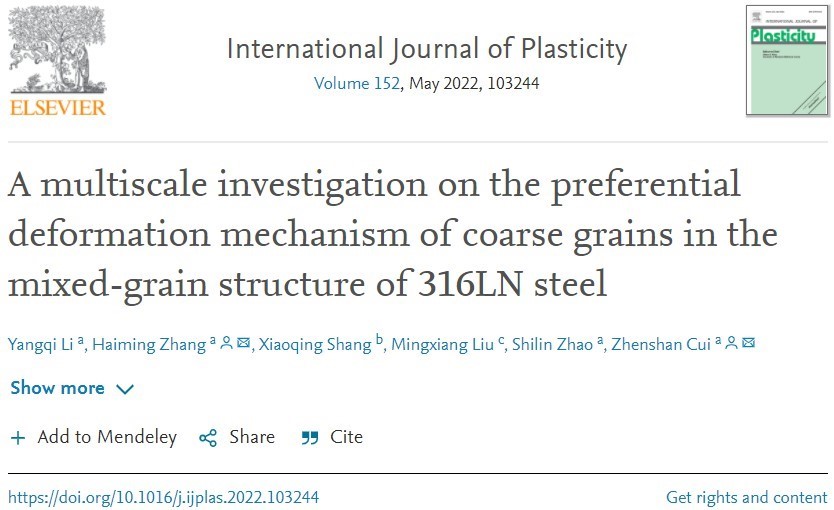 It was found that the grain size plays a more important role than crystallographic orientation in strain partitioning of the mixed-grain structure when the grain size discrepancy is significant. Compared with the fine grains (FGs), the MCGs always take the priority of plastic deformation, even if they are hard-oriented, resulting in the generation of the large deformation band covering the MCG and its surrounding FGs. At large deformation, some FGs in the vicinity of MCGs inside the deformation band sustain more strain over the MCGs to coordinate the enforced deformation in the band, resulting in the intense strain and stress localizations. 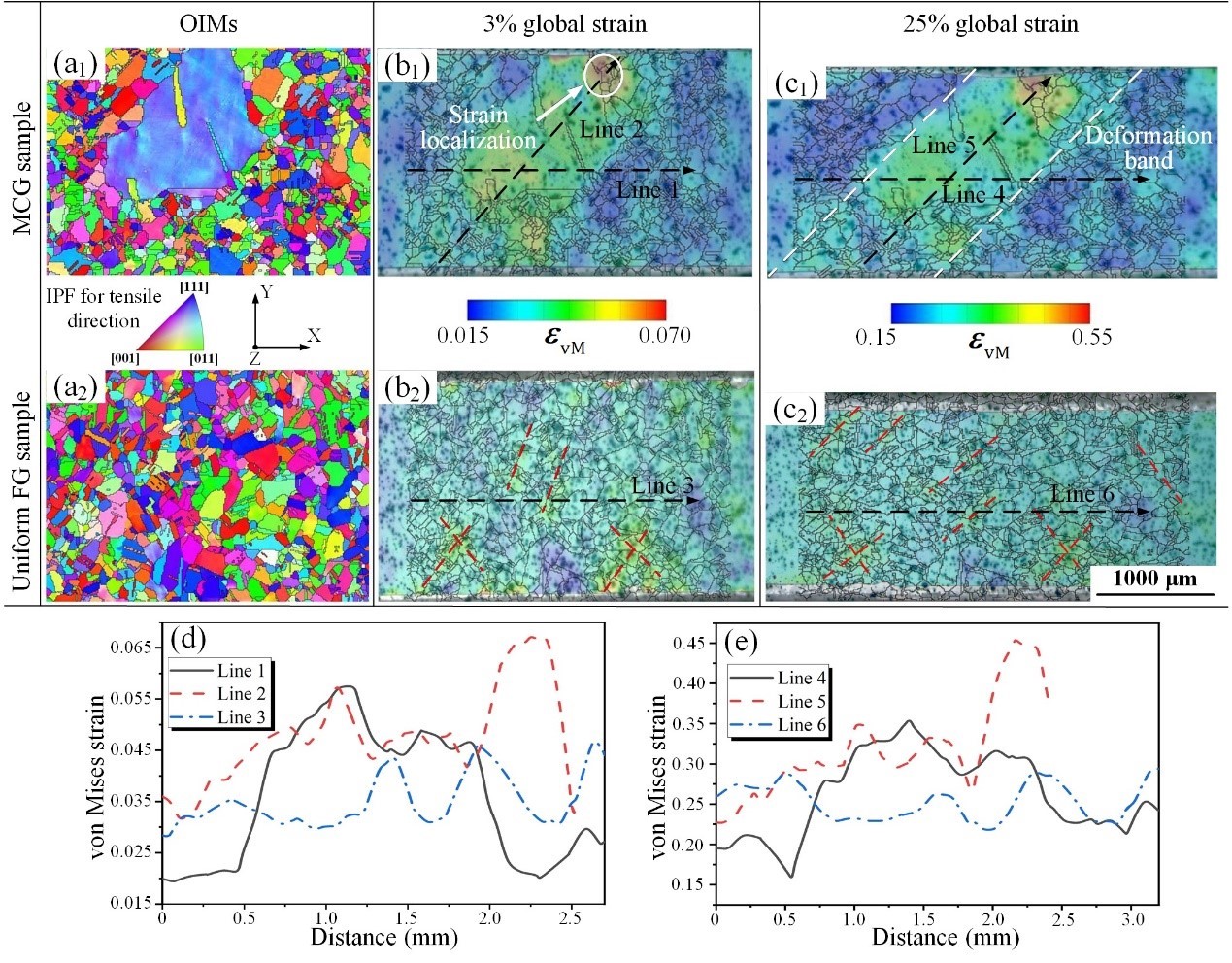 Fig. 1. The experimental von Mises fields obtained from mDIC measurements at (b) 3% and (c) 25% global strain levels. The subscripts 1 and 2 represent the MCG and the uniform FG samples, respectively.

Both the TEM characterizations and CPFEM simulations demonstrate that the interior of MCG deforms with single-slip at early deformation and keeps primary-slip at large deformation. It was further found that the distribution of the number of activated slip systems (Ns) resembles a special ‘lake’ shape in the MCG. Only 1-2 slip systems were activated in the interior of the MCG, while 4-6 near the MCG boundary. Compared with the FG structure which exhibits stronger dislocation interaction in multiple slip scenarios, the MCGs have weaker initial slip resistance and hardening rate due to the less GB-related multiplication and storage of dislocations. Therefore, the MCGs in the mixed-grain structure exhibit preferential and continuous deformation characteristics. The strain partitioning mechanism with high concentration of deformation in MCGs shines a light on the repair of heavy forgings with mixed-grain structure through limited deformation conditions. 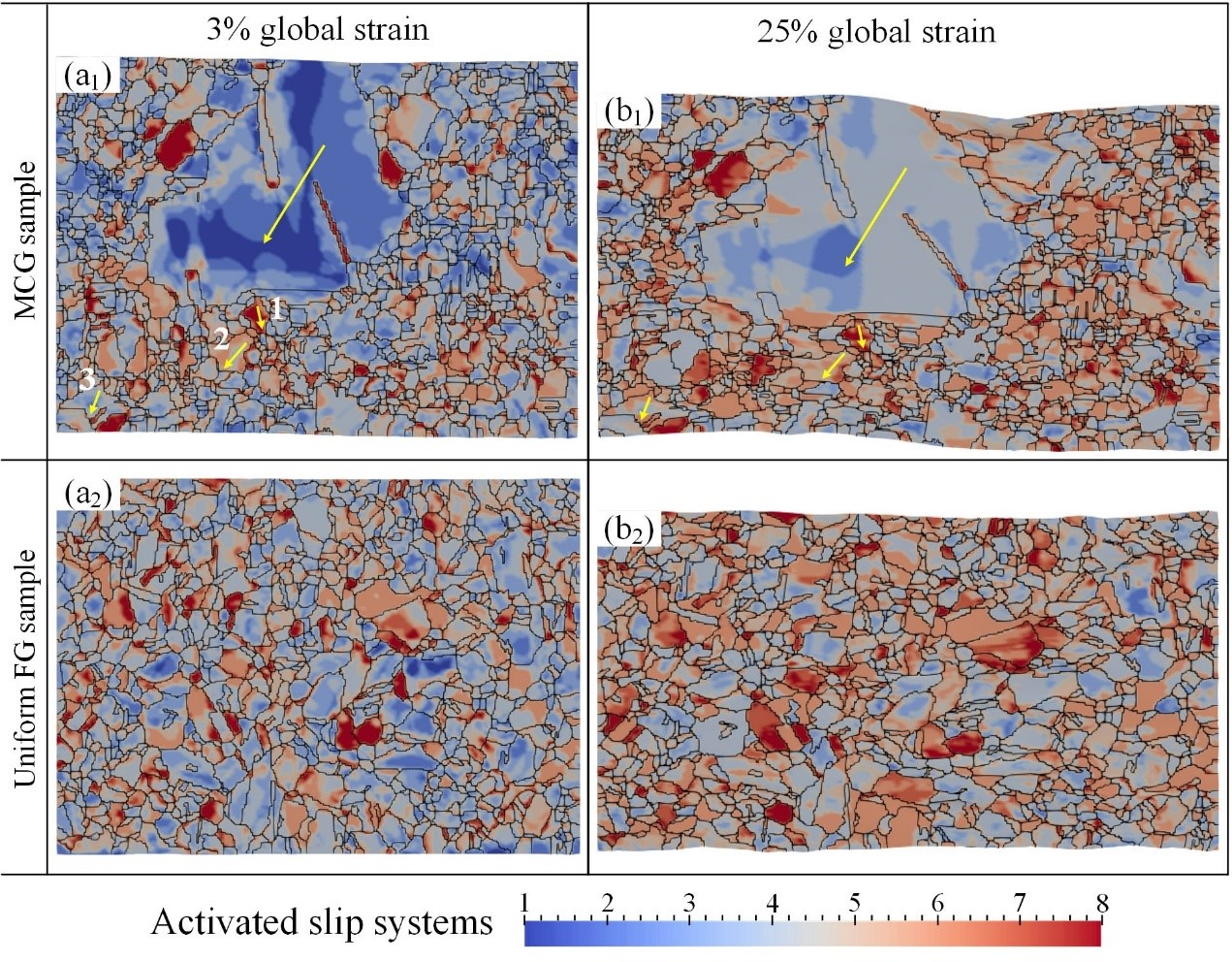 Fig. 2. Simulated distributions of the number of activated slip systems of the samples deformed to (a) 3% and (b) 25% global strains. The subscripts 1 and 2 represent the MCG and the uniform FG samples, respectively.

Fig. 3. The statistical results of the accumulated shear strain of each slip system along the path marked by the yellow arrow inside the MCG in Fig. 2. (a) and (b) correspond to 3% and 25% global strain levels, respectively. 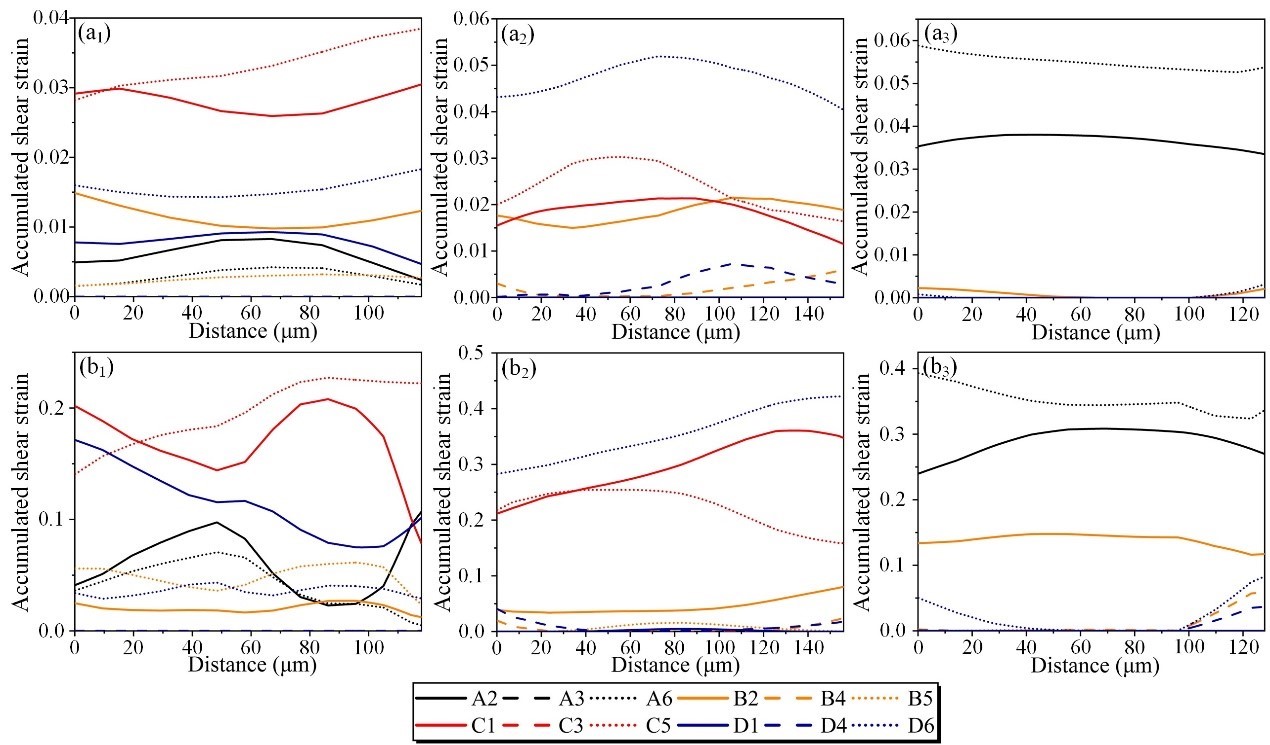 Fig. 4. The statistical results of the accumulated shear strain of each slip system along the path marked by the yellow arrow inside the selected three FGs in Fig. 2. (a) and (b) correspond to 3% and 25% global strain levels, respectively.

Therefore, a two-stage method was proposed to refine MCGs, which takes the advantage of the strain partitioning mechanism of the mixed-grain structure. The first stage was to impose a limited deformation to the steel at room temperature, suppressing the dynamic recovery and leading the preferentially deformed MCGs to accumulate enough deformation stored energy. The second stage was rapidly heating the deformed materials to realize static recrystallization (SRX). The SRX processes, including recrystallization nucleation and grain growth, were in-situ observed by applying high temperature laser scanning confocal microscopy. The related paper, entitled with “Deformation heterogeneity induced coarse grain refinement of the mixed-grain structure of 316LN steel through limited deformation condition”, was published on Materials & Design.

It was found that the MCG mixed-grain structure can be effectively refined by pre-compression at 10% to 25% reduction rate and then holding at 1250℃ for 10 minutes. The increase of deformation not only makes the SRX incubation of MCGs easier, but also affects the recrystallization nucleation mechanism of MCGs. Under a relatively large deformation condition (e.g., 25% reduction rate), the nucleation of SRX occurred both at the MCG GBs and in the interior of MCGs. Under a small deformation condition (e.g., 10% reduction rate), the nucleation of SRX preferentially occurred at the MCG GBs. The nucleated grains grow up in the manner of GB bulging and stop growing when the bulged GB collides with each other and forms the ‘collision front line’. This study further investigated the minimum deformation condition to refine the MCGs. It was proved that the MCGs in the mixed-grain structure can be completely refined when more than 8% compression was applied, while the incomplete SRX or the partial refinement of MCG was observed when the deformation was decreased to 6.5%. 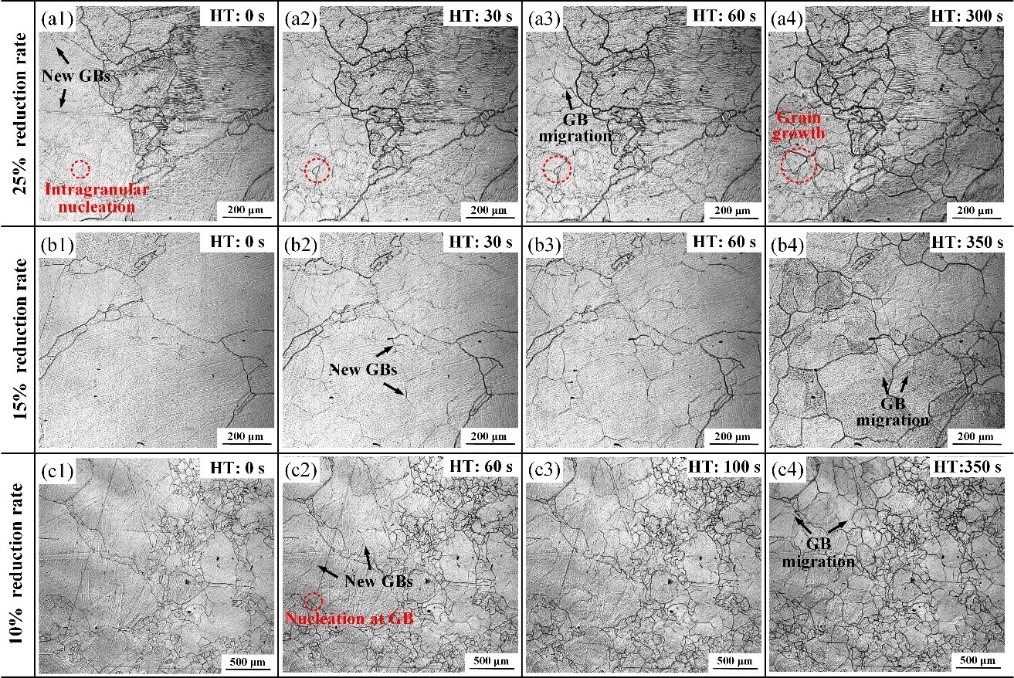 Fig. 6. Thermal etched microstructure evolution of samples with deformation of (a) 25%, (b) 15% and (c) 10% reduction rates at the holding temperature of 1250℃ for 10 minutes. HT represents the holding time. 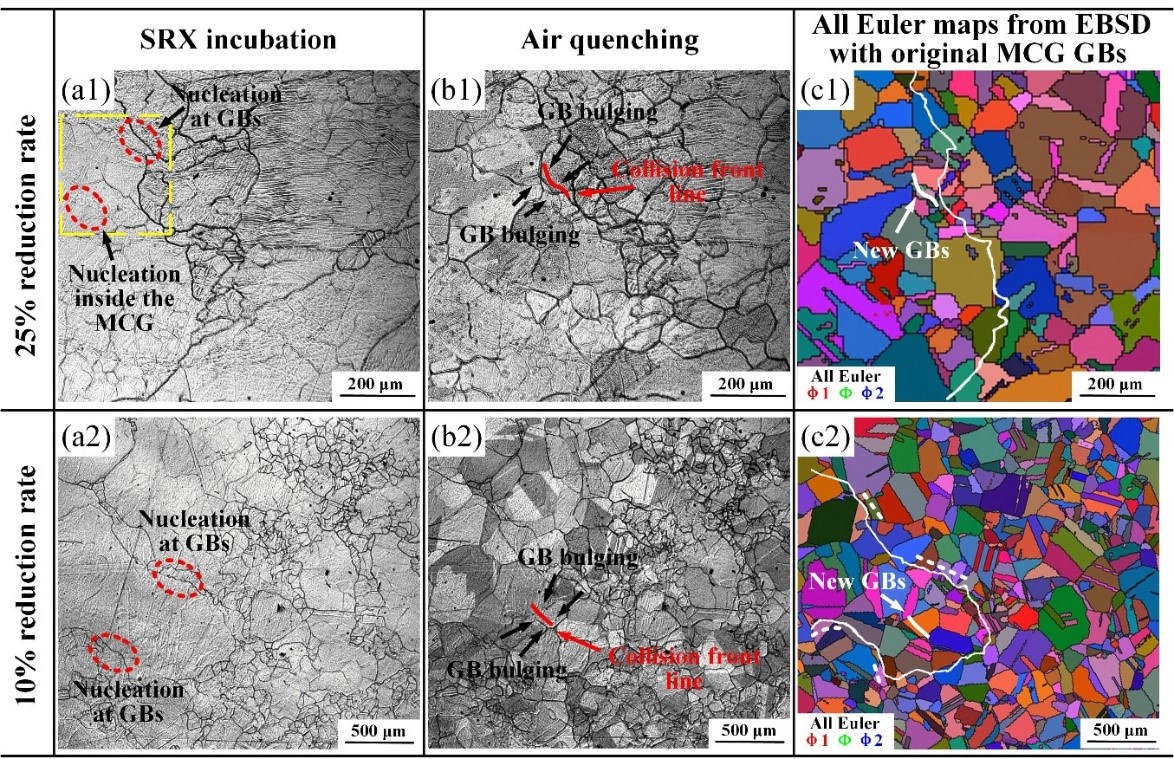 Fig. 7. The effect of deformation on the SRX nucleation behavior of MCGs: (a) SRX incubations, (b) microstructures after air quenching and (c) all Euler map of the air quenched sample obtained by EBSD measurements.

Fig. 8. Thermal etched microstructure evolution of samples with deformation of (a) 8% and (b) 6.5% reduction rates at the holding temperature of 1250℃ for 10 minutes. HT represents the holding time.